Me and my friend are pregnant for the same guy 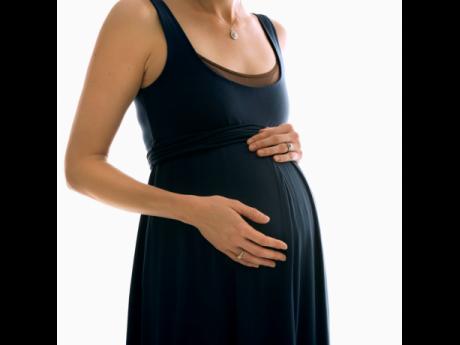 I am 19 and pregnant for a guy who is 20. He and I have been friends for two years, but that is not the issue right now. The problem is I have a friend who is also pregnant for him.

Neither of us wanted to get pregnant. My friend and I both intended to go back to school. Her aunt has decided to take her baby when it is born. My mother said that she cannot take on any more trouble. My father is very disappointed in me because I am his pet. My parents have six children, four girls and two boys. I might as well tell you the truth. This guy smokes ganja and he introduced me to it, and whenever I smoke ganja, I do foolish things. It was on one of these days that I had sex with him without using any protection. But I love him so much.

My boyfriend is planning to travel, so I do not know how that is going to work. My friend and I love him. We don't argue over him. Right now I miss going to school. Except for my friend who is pregnant and my close relatives, nobody knows that this girl and I are pregnant for the same man and we want to keep it that way. So, I hope that you will do your best not to condemn me. Since he got me pregnant, I have stopped smoking the weed, but we are still having sex. I am trying to get him to stop, but he has been smoking from he was 15. His father introduced him to weed and told him it was found on Solomon's grave, so it can't be bad for any man to smoke.

I did well in school. Sometimes when I look at myself, I feel ashamed. But I want to press forward; I don't want to give up. I hope that you will write me back.

I believe you are an intelligent girl, but you are also careless. Your girlfriend and you ought to know better. It is never wise to have casual sex.

This is not the first time you have got pregnant. You said the first time was by an older man and that pregnancy was terminated. Evidently, this young man doesn't care. You and your friend knew that both of you were having sexual intercourse with him. He was the star in your lives.

Smoking of the weed affected your judgement. You felt high. Some girls say that when they smoke weed, it gives them a lift and it causes them to enjoy sex. At least the other girl said the condom broke, but in your case, it was not used at all.

Your parents have been very understanding, if I may say so. Your mother even told you that she got pregnant at 18, but at least she thought that you would have been more careful.

You are going to add a burden to your mother, but I am sure that she will do her best to help you. The other young woman has been promised help by her aunt.

I have no intention to condemn you, but I hope that you will exercise common sense in the future. You have not said what you want to study, but I can only wish you well.