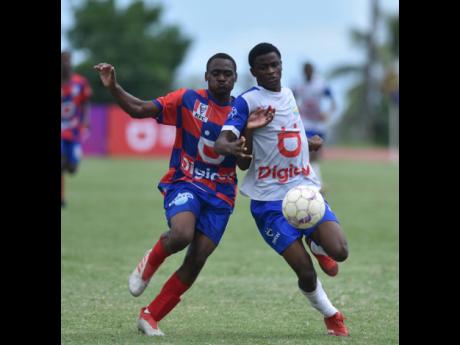 "To create so many chances and not score more than once is definitely frustrating and this has been our Achilles heel from the start of the season. Against Papine we created 25 chances and converted one, but the suspensions are over and we will be back to full strength. This Friday we will be up against Wolmer's Boys' so, hopefully, we can turn it around and start winning games," said Lofters.

Camperdown had two players suspended in a hot-tempered second match against Papine that ended with five players being red-carded. Daquan Brown and Marquies Bailey were ruled by ISSA to be leading instigators in a fight and were handed three-match suspensions.

Since then they have struggled and coach Lofters remains optimistic about finishing in the top two of the group, despite their 1-1 draw yesterday, which has Camperdown in fourth spot on five points.

"I'm thinking about that second spot. Everybody will have to play me again, so I'm not thinking about a third spot. If I beat those guys (Wolmer's, Hydel and Mona) I will finish second," added Lofters.

Camperdown, who chased the majority of the match yesterday, went behind as early as the sixth minute as sloppy defending proved to be their downfall with Hydel's in-form striker Keyanni Jackson pouncing to rifle home his fifth goal of the season.

With six minutes remaining in the encounter, Jardel Williams provided a moment of magic as Hydel's defence was finally breached after sustained pressure.

Hydel's head coach, Devon Anderson, said due to their inexperience, a level of patience will be applied as he is tasked with building a project.

"Those players out there have never played Manning Cup football in their lives, so this is an experience for them. The good thing about it is that out of the 22 players in our squad, a total of 18 of them will be able to return next season, so it's a building process for us," said Anderson.