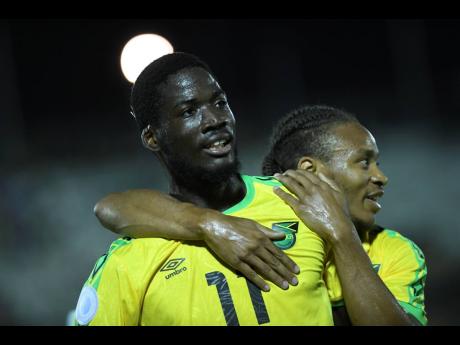 Shamar Nicholson (left) celebrates with Bobby Reid after scoring a goal in the Concacaf Nations League against Antigua and Barbuda on September 6, 2019. Nicholson will lead Jamaica’s lines in World Cup qualifying action against Mexico.

The match will be played at the Azteca Stadium in Mexico City, starting at 9 p.m. Jamaica time.

The 24-year-old former Boys' Town striker, who has already netted five goals this season for Charleroi, admits to being delighted with his form and ready to score goals for his country.

"Shamar is always Shamar, and Shamar's aim is always to help my national team to the best of my ability and to score some goals," said Nicholson in an interview from the Reggae Boyz base in Mexico City yesterday.

"As you know, it was my first hat-trick in Belgium and it was our first home win of the season, and that made it even important, but it was a fantastic feeling," he said.

Nicholson has scored 21 goals for Charleroi since joining the club from Slovenian NK Domzale in 2019.

The big striker, who made his debut for the Reggae Boyz in 2017, has scored eight goals in 22 appearances.

Nicholson will enter today's opening World Cup encounter on the back of a below-par showing at the Concacaf Gold Cup tournament, where he scored one goal from four appearances.

He said he is now in much better shape and expects better performances.

Asked if his form had improved, Nicholson said: "Yes, most definitely.

"I had less preparation going into the Gold Cup, but this is not an excuse, I was disappointed with my overall performance and such," Nicholson said.

"I continued to work, get in shape, and I think now I am in really good form," he said.

He will be vying for one of the centre forward spots in the Reggae Boyz starting line-up along with Javon East, Junior Flemmings and Cory Burke.

Tonight's match at the Azteca in the first of two in quick succession for Jamaica. On Sunday, they will host Panama at the National Stadium in Kingston.