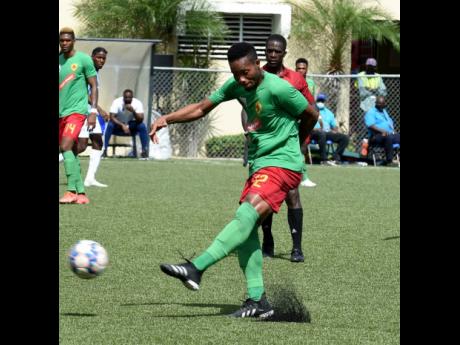 Humble Lion midfielder Andrew Vanzie is hoping that his performances in this year's Jamaica Premier League (JPL) competition will now catch the eyes of the national football selectors after he was named STAR Balla of the week for a second time on Wednesday. The 30-year-old Vanzie played a vital role in helping Humble Lion to secure a crucial 2-0 victory over Harbour View in their JPL encounter on Sunday. The talented attacking midfielder scored the opening goal of the match in the 61st minute from the penalty spot, before Levaughn Williams sealed the victory for Humble Lion in the 87th minute.

Vanzie, who has three national caps, is now second in the Golden Boot race with four goals, one behind the competition's leading scorer Oquassa Chong of Harbour View.

"I am hoping that they (coaching staff) will see it (his performances), and so I am just going to continue to work hard and build on my game and try to make my way back into the national team," said Vanzie, who made his debut for the Reggae Boyz in 2011. He added that he is really feeling excited and satisfied with the level of football he is playing right now and he can push himself a lot more. "But it is gradually building, and with the help of the Humble Lion coaching staff and players, I know that I am going to get a lot better," he said.

"I am also very happy that I have won this award for the second time this season, because it will help to boost my confidence for the rest of the season," he said.

After a very poor start to the season, Humble Lion remain at the bottom of the table on six points, four behind sixth-placed Tivoli Gardens, who they will face on Saturday.

Vanzie added that Humble Lion have two games remaining in the preliminary round of the competition, and these matches are must-win games if they are to advance in the play-offs of the competition. "We have to win these games if we want to get into the top six; and so these games are cup finals for us, because we must win them to move on," he said.