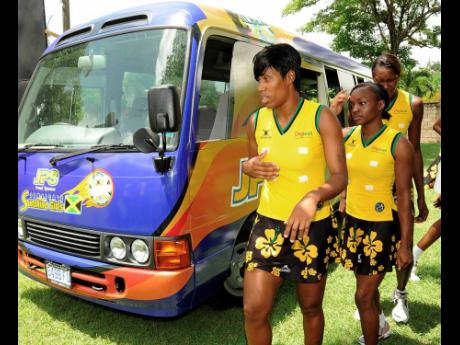 File Sunshine Girls Kasey Evering (left), Sateva Taylor (centre) and Romelda Aiken walk next to one of the netball team buses shortly after it was presented to the Jamaica Netball Association by Jamaica Public Service Company Limited in August 2010.

President of Netball Jamaica (NJ), Tricia Robinson, was at a loss for words after waking up to the news on Monday morning that thieves had stolen the association's two Coaster buses from the Sunshine Girls' Netball House, which is located on 17 Widcombe Road, Barbican.

Robinson told STAR Sports that camera footage from the house revealed that the thieves entered the netball house premises at about midnight on Sunday and left after 4 a.m., this after they had stripped off the association's branding off the buses. The branding includes pictures of the Sunshine Girls and their sponsors.

"It is a massive blow for us because when we got there you could see remains of the branding of the Sunshine Girls on the ground," said Robinson "How do we move around now because they stole both buses from the house and this is a very hard pill to swallow," she added.

Robinson pointed out that one of the buses was donated to NJ by the Jamaica Public Service, while the other was donated by Flow and both were comprehensively insured. The Sunshine Girls are currently preparing for their Tri-nation home series against South Africa and Trinidad and Tobago, and, according to the NJ boss, it is now going to cost her association a lot of money to transport the players from their homes to training and back.

"This will certainly set back our programmes because this is what we use to transport the girls," said Robinson. "This is their home, it is a violation of the girls because you come to their home and you take away their transportation in a curfew period," she said. "It is a painful experience because this is a massive violation and so I am appealing to the persons who stole the buses to return them."

Meanwhile, a police source at the Matilda's Corner Police Station told STAR Sports yesterday that a report has been made by NJ and they are now investigating the matter. The house, dubbed 'Sunshine Chalet', or simply 'Netball House', is used for housing players from the various national programmes during training camps, seminars and meetings.

The five-bedroom house, which also has a swimming pool, was handed over to the NJ by then Prime Minister Bruce Golding in January 2010.