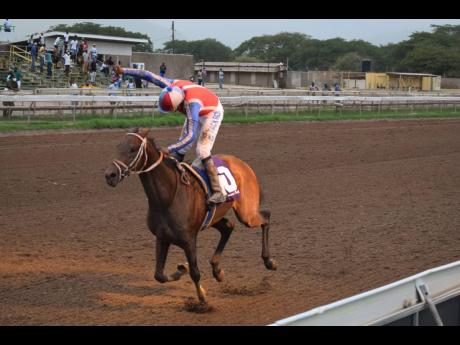 Shane Ellis, who is seen winning the Jamaica St Leger aboard CALCULUS, expects his mount to repeat in the Jamaica Derby.

A pulsating contest is expected in Saturday's 101st running of the rich $7.5 million BetMakers Jamaica Derby, in which the ante-post favourite, CALCULUS, takes on a 10-horse field in what is expected to be a massive showdown at Caymanas Park.

The Jamaica Derby will be run over 12 furlongs and will feature the country's best native bred three-year-old colts and geldings.

This prestigious race is one of two big races on the card, the other being the Jamaica Oaks, whose 82nd running will feature the country's best three-year-old fillies. It carries a purse of $3.75 million.

The Gary Subratie-trained CALCULUS, who won the Jamaica St Leger over 10-furlongs quite convincingly last month, is drawn in post position one and will be ridden by former champion jockey Shane Ellis. Despite the unfavourable draw, Ellis said he is confident that CALCULUS will win.

"I don't feel anyway about the one draw because the draw won't determine the winner of the race," said Ellis. "He has been working really well and he is also looking great and so I am feeling very confident," he said.

"I am expecting that it is going to be a scintillating show because we have 10 exciting thoroughbreds that will be on the track," said Gooden.

"We know that the favourite is CALCULUS, but it is anybody's show and we are just expecting the punters and fans to come out and have a great day with us on Saturday," she said.

"The ladies will not be put to rest because they are going to come out and put on a show for the public," Gooden added.

Dallas Baker, head of International Operations at BetMakers, said his company is very excited to be a associated with the Jamaica Derby.

"We are delighted to be a part of the Jamaican spirit for the past six to seven months and we are looking forward to an exciting time ahead and we look to bring fixed odds betting to Jamaica," said Dallas.

The draw is as follows: FURTHER AND BEYOND, runner-up to CALCULUS in the St Leger, will break from gate nine with Dane Nelson abroad; POSITIVE ID, the mount of Aaron Chatrie, starts from gate two; REGAL AND ROYAL, with Tevin Foster, is drawn in gate three; SANTORINI, with Linton Steadman in the irons, goes from gate four; IANNAI LINKS with Richard Parchment, gate five; Ryan Lewis will be aboard MONEYMAN from gate six; BILLY WHIZZ, the mount of Dick Cardenas, is drawn in gate seven; Anthony Thomas will ride DADDY JONES from gate eight; and BIG JULE will break from gate 10 with Omar Walker.