US visa issue for Samardo Samuels 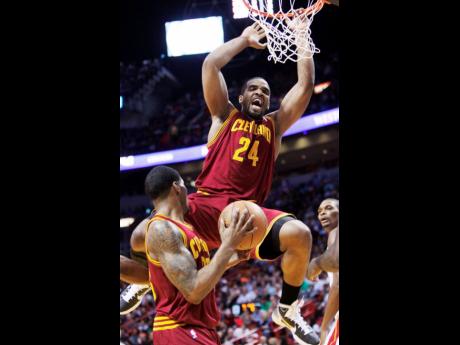 National basketballer Samardo Samuels (top) during his time with the Cleveland Cavaliers in the NBA in 2011.

National senior men's basketball player Samardo Samuels could miss the BIG3 basketball tournament in the United States this year if he does not get a US visa.

Samuels says that his passport with his US visa, his laptop, and other valuables were stolen when thieves broke into his car in Italy last year.

Samuels, 32, recently returned to the island from Israel, where he had been playing, and obtained a new Jamaican passport.

However, he said that he has been advised that there are no US visa appointment dates that are available now, which could lead to him missing out on his contract in this year's championship, set for July 10 at the Orleans Arena in Las Vegas, Nevada.

"You know how the US Embassy is right now, they are not taking any appointments unless it is an emergency, and the fact that I have the contract and everything, they don't consider it an emergency," he said.

"They have the BIG3 draft pool coming up and I will have to be in the States for the draft, but if I don't get this visa then I won't be able to be there or even play in this season's tournament."

Samuels said that he has been in contact with the league organisers and they have promised him that they will be doing all that is possible to assist him with this matter.

"I am hopeful of getting there, but you know it is just the visa that is held up," he said. "I have spoken to Clyde Drexler, who is the president, and they are aware of the situation and they sent me a letter and everything, so it is just an appointment that is the hold-up at the embassy right now.

"This is definitely a way to earn some money because with COVID, a lot of people are out of a job and for them to give me an invitation and to consider me is definitely a great opportunity, and I would really like to get this job."

Samuels last played in the BIG3 tournament in 2019 with the Trilogy, which also consisted of former NBA players Jason Terry and Carlos Arroyo.