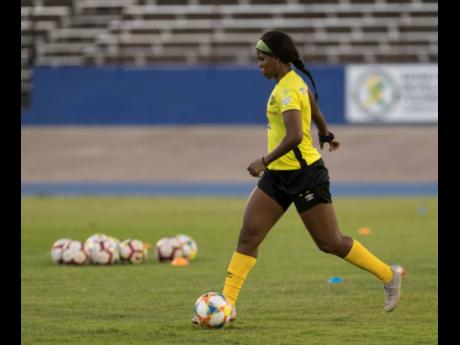 Reggae Girl Khadija Shaw created history as the first female footballer to be honoured with the Order of Distinction for her outstanding contribution to the sport.

At 23 years old, Shaw has accomplished what no other Reggae Girl has done by earning this award.

Her consistent goalscoring not only led Jamaica to its first-ever FIFA Women's World Cup appearance in 2018, but her 42 goals also saw her become the nation's top scorer of all time, whether male or female.

However, she said that her commitment to the sport is the main reason behind her achievements.

"Age doesn't matter, and there's not a meaning behind it other than working hard; and by doing so, you put yourself in a position to accomplish goals," Shaw told STAR Sports.

She remains thankful, however, as her talent and dedication continue to be recognised, but knows it is in her best interest to stay focused on future achievements.

"It's always good to be rewarded for your hard work, or even see result at that," she said.

"It's just another award in my eyes. I achieved it and I am grateful, and now, on to the next task."

Reggae Girlz team manager Jean Nelson says she is not surprised by Shaw's accomplishment, as she has always done what is required to be one of the best in the sport.

"I'm not surprised by the honour for Khadija, as she has been an outstanding female footballer and an exemplary figure for us," Nelson said.

"She works very hard by waking up five in the morning for training; and in the afternoon, she will go to the gym and train again."

Shaw says that the most important lessons she has learnt throughout her career is to keep a positive mindset and to never allow fear to stop you from excelling.

"I have learnt a lot throughout my career, but one of the things that I would say is, don't be afraid to do the unexpected," she said.

"Take the risk if you believe in it, as well as block out negativity that may want to hinder your success. The nervousness you feel means you're growing."

Shaw, who grew up in a low-income neighbourhood in Spanish Town, St Catherine, said it is also important to follow your dreams and never allow your current position in life to deter you from achieving your goals.

"Don't let your circumstances deny you the life you would want, or hope to live one day," she said.

"I always say the inner city will never define who I am or where I should be, and you shouldn't, too."

Shaw is hopeful that her hard work continues to be a source of motivation for children in her home town and the world.