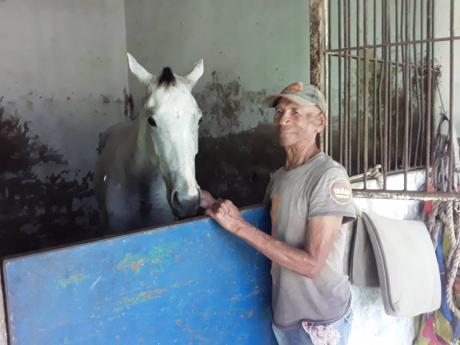 Vincent Campbell, a groom at Caymanas Park, in the stable with a race horse in his care.

Veteran groom Vincent 'T-Jack' Campbell says he has no intentions of retiring any time soon despite being well over the retirement age of 65 years old.

Campbell, who has been a groom at Caymanas Park for more than 50-years, recently celebrated his 83rd birthday with fellow grooms and friends at trainer Carl Anderson's stable, where he is based.

Campbell says he has won more than 100 races in his career over the years. Among the notable horses that he has conditioned in the past are MISS AMERICA and SILVER LIGHTNING.

However, despite failing to win a race for more than three years, Campbell told STAR Sports that he will continue to work hard everyday.

"I love this game because I love the horses, so I'll just keep on working hard," he said. "I am never sick, to say that I am going to sit down, because I am still working and enjoying what I am doing, which is taking care of the horses over here.

"I have never done any other work in my life but just taking care of the horses at Caymanas Park and I love this very much."

Campbell said that he has maintained good health over years because he does not drink alcohol or smoke.

"I just eat good and take care of my body and ensure that I get a lot of rest when I am not working during the days, and that is why I am so fit and strong for my age," he said.

"I have no sickness, so thank God for that and I am going to continue working as long as I am alive and well."

Campbell said that his love for horses developed from age five while living in Westmoreland with his father and grandfather.

"My grandfather used to have a lot of horses and I used to ride them on the property every day until I started going to bush track in Westmoreland in those days," he said. "From there, my love for horse racing developed until I moved to Caymanas Park in the 1960s."

"When I started, it was rough because the money was poor and it is still poor and I hope it will get better for us one day."

In addition to a two-year-old grey horse, which is yet to compete, Campbell is also in charge of watering the horses at Anderson's stable.

Fabian Whyte, president of the Jamaica Grooms Association, says Campbell has been a role model for the grooms because he is very dedicated to his craft.

"He has made a good contribution to the sport because he has been here for a long time," he said. "He is also a very good groom and he will also be covered under the health insurance policy once he has paid for his licence."