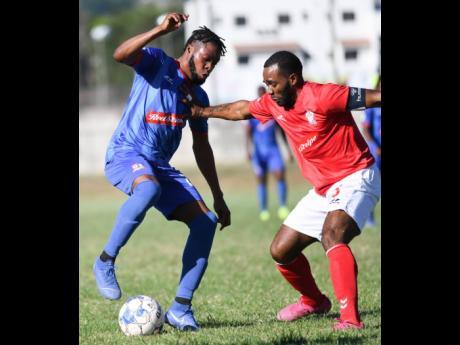 Two weeks after they were beaten by Arnett Gardens via a late goal, the Andrew Price-coached team got their revenge, defeating their rivals 3-1 on Sunday. While results have been fluctuating recently, they now are tied with Mount Pleasant, with the best home record in the league, earning 22 points so far at the Effortville Community Centre. Mount Pleasant will be their next opponents on Sunday, and a win would give their chances at a first-round play-off bye significant steam.

Dunbeholden avoided relegation last season with 33 points. After Sunday's 1-0 win over Cavalier SC, they have landed themselves in fifth place on 35 points, already surpassing last year's total with 10 games left to play. Statistically, it has been an outstanding year for the St Catherine-based club, but head coach Michael Cohen will have his focus on securing the club's first ever play-off berth in their second season in the nation's top flight. They have a tough task when they face leaders Waterhouse tonight at the Drewsland Stadium.

Tivoli Gardens had to make hard work of it but they continued their march up the standings, edging out UWI FC 1-0 at the Edward Seaga Sports Complex. They are now five games unbeaten and have won three straight for the second time this season. The result is a great start to the third round, which now sees them in seventh place with 32 points, just two points shy of the playoff places. The team standing in their way is none other than their rivals Arnett Gardens, who they will face at the Anthony Spaulding Sports Complex this weekend.

Molynes United are living a charmed life at the moment. They lost their 13th game of the season at home to Portmore United 2-0 and yet still they are in 10th place, seven points above the drop zone. They will be fortunate that UWI FC and Vere United all dropped points at the weekend, but they are not doing themselves any favours in their quest for Premier League survival now having lost seven straight home games. Their only win in the second round came away to Waterhouse before Christmas.

The Andrew Peart-coached UWI FC will be kicking themselves as to why they weren't able to take advantage of the chances they created in the second half against Tivoli, especially when they had the upper hand against. A goalkeeping error doomed the team to a 1-0 defeat, which leaves the Pelicans still in the bottom two on 17 points with 10 matches remaining. There is still a path to save themselves with Molynes United bleeding points, but they need wins, and games are running out.

The 'Junglists' have been finding the going tough recently. After they got the better of Humble Lion two weeks ago, via a stoppage-time winner, Arnett Gardens could not repeat the same feat, losing 3-1 to their rivals. They are now winless in three and have lost back-to-back games for the first time this season. They have now slipped to sixth place in the league with 34 points, with Tivoli Gardens two points behind them. The final west Kingston derby of the season this Sunday could go a long way in determining who will make the playoffs.