P’more find form while ‘Bibi’ is away 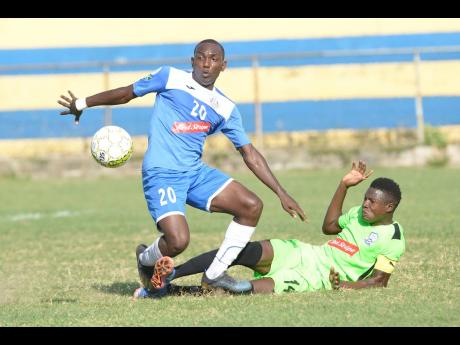 There was no Ricardo 'Bibi' Gardner on the bench for defending champion Portmore United in their Red Stripe Premier League (RSPL) game on Sunday against Molynes United, but the St Catherine-based team had no problem dispatching the RSPL strugglers 2-0 at the Constant Spring playing field.

With many spectators in the stands assuming the worse for the former Reggae Boyz captain, club manager Clive Marshall explained that Gardner was away in Mexico attending the Concacaf Champions League draw, in which Portmore will participate. He will return to the sidelines for the next game.

"As you know, we have the Champions League coming up in February and the draw is today (Sunday) in Mexico City and one of the requirements is for the coach to attend the ceremony.

"That is not the case (Gardner sacked or quit) and obviously the fans are not following the media, as it was announced, it was publicised that today (Sunday) is the Concacaf draw and we have to have representatives for us.

"So again fans it's nothing like that, he is attending the draw for the Concacaf league in February and he will be back on the bench next Sunday," he said.

Meanwhile, the champions, who were coming off a defeat in their last game, beat host Molynes 2-0 on goals from Rondee Smith and Cory Burke.

Smith capitalised on a defensive blunder in the 10 minute to fire the visitors ahead and Burke, who was outstanding throughout, sealed the win with a header from a free kick four minutes from time.

After a fluctuating season thus far, Marshall is hoping for a more consistent showing going forward.

"It (win) means a lot. It was a collective effort and we really appreciate it.

Portmore climbed over Molynes and Harbour View, to seventh in the table with 21 points.

Molynes winless streak is now 10 matches and coach Calvert Fitzgerald, who lost both games since taking over from Lijyasu Simms, noted that they haven't score in four matches and says they need to start scoring again to start rebuilding confidence.

Molynes are now eighth with 20 points.