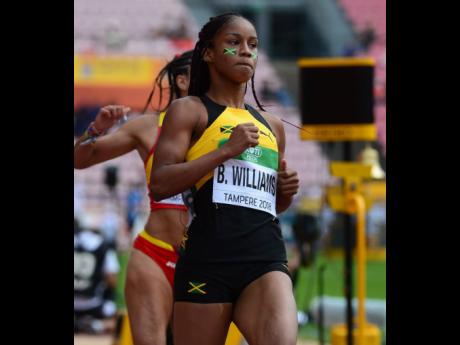 World Under-20 sprint double champion Briana Williams will plead her case to the Independent Anti-Doping Disciplinary Panel (IADP) on September 23, 24 and 25 following yesterday's preliminary hearing at The Jamaica Pegasus hotel.

The announcement of the dates means that the 17-year-old sprinter will surely miss the 2019 IAAF World Championships, which is scheduled for September 27-October 8 in Doha, Qatar.

A request was made from Williams for an expedited hearing through her representative Dr Emir Crowne in August with the hope of her being vindicated before entries for Worlds close on September 15. But now it seems sure she will not be included in the squad.

Williams tested positive for the banned diuretic Hydrochlorothiazide (HCTZ), which was initially detected at the National Senior Championships in June where she placed third in the 100m in 10.94 seconds. Her performance at the time virtually assured her of a place in the World Championship team.

Chairman of the IADP Kent Gammon was present in the preliminary hearing along with panel members Dr Marjorie Vassell and Ms Denise Forrest and was adamant that his concern was solely on addressing the matters raised in the case.

"My job along with Dr Vassell is to make our findings based on the adverse findings brought to our attention and we can't comment on any other matter," he stated.

Gammon stated that the process in the preliminary hearing went smoothly and that Williams, through her representative, made the decision to have the hearing.

"We had the preliminary hearing [to determine] what athlete wanted to do," he said. "She has the opportunity and/or the right to waive a hearing or have a hearing. She chose to have a hearing. We wouldn't have known that until now. We are having the hearing on the 23rd. And we are proceeding accordingly. We will make our findings in due course based on the evidence."

Williams' representatives identified a contaminated cold and flu medicine as the source of the banned diuretic and maintain their position that she bears no blame in the positive finding.