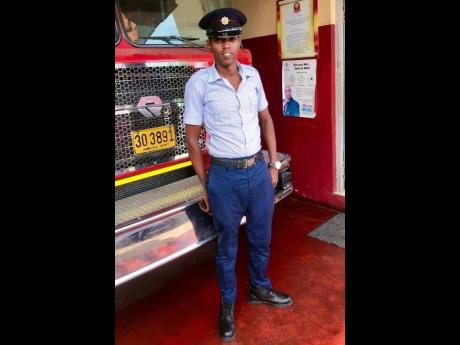 Firemen in St Ann are in a sombre mood after one of their colleagues was killed in a motor vehicle crash yesterday in Ocho Rios.

Dead is 25-year-old Larenzo Douse, who served the fire department for six years. Douse was the son of Assistant Superintendent Garnett Douse of the St Catherine Fire Division.

Reports are that a unit from the Ocho Rios station had just finished putting out a blaze and was parked by the side of the road when a car overtook a line of traffic and crashed into the back of it, pinning Douse between both vehicles. He was rushed to the St Ann's Bay Regional Hospital where he was pronounced dead.

Senior Deputy Superintendent Anthony Hinds, who is in charge of the St Ann Fire Department, said the entire team was devastated. He said they were in a meeting with Commissioner of the Jamaica Fire Brigade, Stewart Beckford, and unable to speak much.

"We're in a sombre mood right now and the commissioner is here at the station," he said.

In a release, Local Government and Community Development Minister Desmond McKenzie said Douse had his whole life ahead of him.

"The grief at his terrible demise is being felt beyond the Ocho Rios Fire Station, where he was stationed, and goes all the way into the St Catherine Division, where young Larenzo's father is a serving assistant superintendent," the statement read.

He continued: "I have no words to demonstrate how I feel about this incident. I know that the commissioner of the Fire Brigade and a host of personnel are personally extending themselves to offer support. I can only say that I deeply grieve this destruction of a young life, and I hope that in the coming days, when the question 'why?' will be asked again and again, that the immediate family and friends of firefighter Larenzo Douse will eventually experience some level of healing. May he rest in peace and light eternal shine on him."

McKenzie appealed for road users to obey the rules of the road as their way of contributing to road safety.

A tribute also came from the Kingston and St Andrew Division of the Jamaica Fire Brigade which posted on Facebook, "Our sincere condolences and prayers are extended to the bereaved family, co-workers and friends as they grieve this terrible loss."

This is the second tragedy to befall the Ocho Rios station in more than a year as on September 13, 2021, two of their colleagues perished in a motor vehicle crash along the Laughlands main road in the parish.