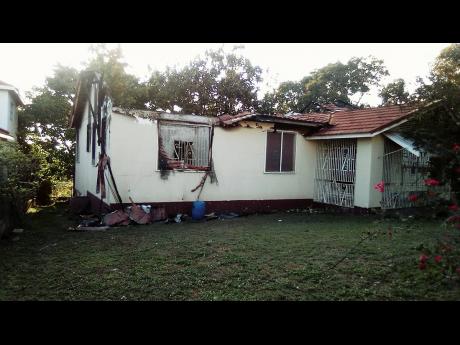 By the time one unit from the Old Harbour Fire Station, assisted by another from Spanish Town, could respond to the blaze, Anglin's charred body was recovered from the rubble. Acting divisional head of the Jamaica Fire Brigade in charge of St Catherine, Joshua Davis, said his men got the call almost an hour after the fire started. To compound the problem, they were given the wrong address.

"Furthermore, when we got to the house, it was evident that three persons living there with the senior citizen were trying to put out the fire before they call the fire department," Davis said. "By the time the units got there the house was engulfed in flames and at this time it was impossible to save the senior citizen." He advised that persons who are untrained in the act of extinguishing fires of this nature should not take it upon themselves to attempt such a task; they should call the fire brigade immediately. He said that investigations have uncovered that the cause of the fire was an electrical malfunction.

Family members were not available for comment when the news team visited the scene. Other occupants of the house did not comment either. However, neighbours said that the fire appeared to have started in Anglin's bedroom about 4 a.m. and quickly got out of control, engulfing the five-bedroom house

"The fire woke me up and I saw some other persons who live at the house trying to put water on the fire but it couldn't work. The fire was coming through the roof before the fire units arrived," said one neighbour. Another described Anglin as the best neighbour one could have and a great person who did not deserve to die like that.

Meanwhile, Davis put the risk associated with the damage at $50 million and the value of the house at $25 million.