Mother of two killed in her home 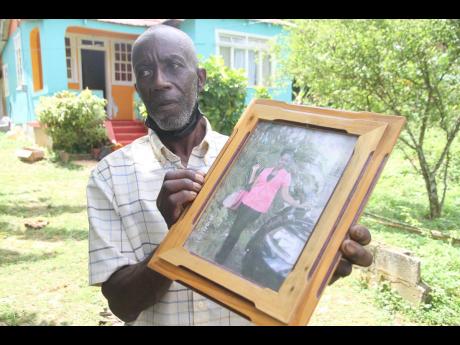 A distraught Ean Richards shows a photograph of his daughter, Annakaye Richards, who was murdered last Friday in her home in Comfort, Manchester.

Superintendent Lloyd Darby, commander of the Manchester Police Division, has issued an appeal for information surrounding the death of 32-year-old Annakaye Richards, aka Kush.

Richards was murdered minutes after 8 p.m. last Friday in her home in Comfort district while her two children were playing in the living room. Darby said that the investigation is in its early stages.

"We do not have many leads, but we are asking persons who would have any information whatsoever that can assist the police to do so," Darby pleaded to residents in the area as he said they want to put an end to the occurrences.

Information is that Richards' two children, ages 12 and four, were in the living room when they heard a door being kicked in followed by loud explosions. The elder sibling grabbed his brother and they snuck out to their grandfather who lives nearby, telling him their mother had been shot. The grandfather went to the house with other relatives where they found Richards lying in a pool of blood.

The boys' grandfather, Ean Richards, said that there were two attempts to firebomb his daughter's home and he had warned her to leave the community, but she refused.

".. Due to where she was at the other house, it's just a small house, and because she needs space for the children, she seh out here is more comfortable for her, and the children can have their space to move up and down," he said. He said that he didn't know who was trying to get his daughter out. The distraught grandfather said he has arranged for his grandchildren to get counselling.

"I got to be strong at this time. It nuh mek nuh sense I get weak," he said.