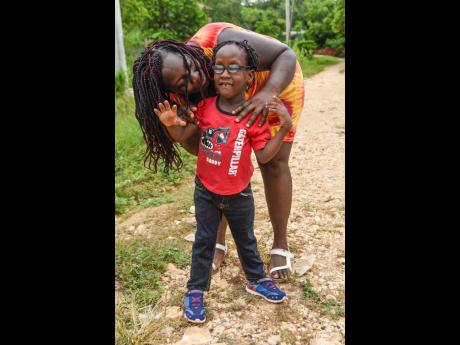 Shanice Rowe and her son, Lashaun.

Shanice Rowe, mother of 'miracle baby' Lashaun Rowe, is thanking THE STAR and its readers for making her son's birthday a memorable one.

In THE WEEKEND STAR, published on September 17, she said that Lashaun's only wish was to receive a computer tablet for his birthday, which is September 18. Rowe said she was saving to purchase the device, but would not accumulate enough money for him to receive it on his birthday. However, when the newspaper shared the story of the youngster who doctors said would not live to see his third birthday, two readers reached out and ensured that Lashaun got his gift.

"His little face light up when he saw not only one but two tablets. He got them just in time for his birthday and I am really happy. I just want to thank the persons who made this happen and THE STAR for sharing his story. To everyone who wished him, you are all nothing short of a blessing, " she said.

Lashaun suffers from a medical condition call Walker-Warburg Syndrome, a rare multi-system disorder characterised by muscle, brain and eye abnormalities. Children born with the condition display varying degrees of intellectual disability and often have seizures. But on Saturday, Laushaun was dancing away.

"He danced and play for the entire time. You should have seen his face," his mother said excitedly.

"Right now he is watching YouTube. He is singing the days of the week, so I already see how beneficial it is to him. He gave one of the tablets to his little brother. He is very happy and that is everything to me so once again, a big thank you to everyone," Rowe added.