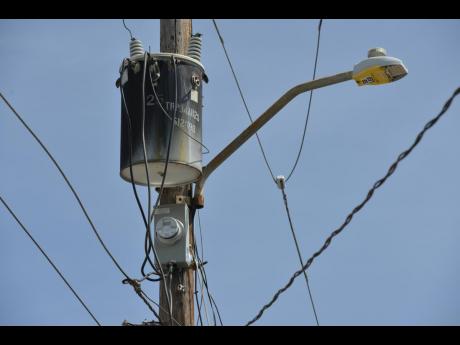 The meter which the residents have identifed as to where the Jamaica Public Service cuts the power daily. Residents say they are tired of the power outages. 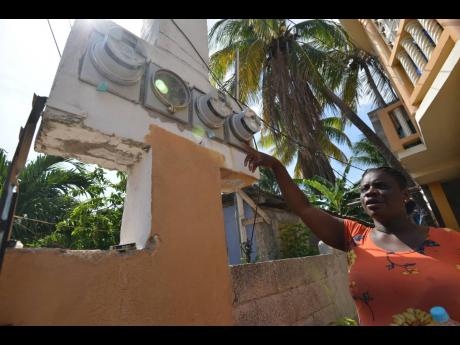 Lorraine Lambert points to her meters.
1
2

A Jamaica Public Service (JPS) team was stoned by residents of Allman Town in Kingston on Wednesday when they went to remove illegal wires.

Audrey Williams, JPS's media and communications manager, told THE WEEKEND STAR that this was not the first occurrence as JPS teams were also attacked earlier this year.

"This situation is completely untenable. If the JPS cannot enter the community to take down the illegal connections, the perpetrators of these acts will have to take responsibility for the declining electricity service. Yesterday's (Wednesday) incident was reported to the police," she said.

The police's Corporate Communications Unit confirmed the report and disclosed that an investigation has since commenced. Williams said that the illegal extraction of electricity in sections of Allman Town is causing frequent power outages there.

"The situation in Allman Town is unacceptable. Not only is theft at the level of over 90 per cent which has often led to damage of JPS equipment, but constantly high level of theft is causing network to fail in this community," she said. But some of the residents are fuming that they have been hit with high utility bills despite going long periods without power.

"Mi have a suit fi a man and a next week him want it, but mi cannot get fi complete it because every minute light go weh. When yuh hear di good affi suffer fi di bad, a it dis. A thousands of dollar mi could a collect but mi affi a turn back clients. Plus a 'bout six people mi affi refund ina two weeks," said tailor Eli Barrett. Shop owner Lorraine Lambert said the constant power outages have caused the spoilage of several items.

"This has been going on for about three months now," she said. "Every week for the last three months we have been losing current from 10 a.m. to 6 p.m. and sometimes in the night. We are all without lights. Children cannot do their online classes."