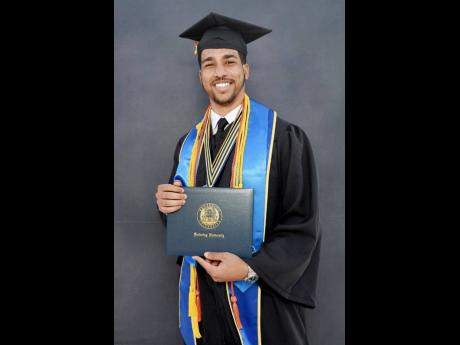 When Brandon Gurrell left Jamaica in 2016 to pursue tertiary education in the United States of America, he had just enough funds to cover his first year of university. Despite not knowing how he would finance the next three and a half years of his studies, Gurrell relied on hard work and faith to get him through.

"You have a lot of brilliant students there and I felt like I was an average student and I really wanted to find my own way. Everybody at Campion were really high achievers, came from a background where their parents went to university overseas, and were doctors and lawyers. They would have everything figured out already, but that wasn't the case for me. And although I don't come from a poor background, my parents left it up to me to figure it out," Gurrell shared.

He attended Munro College for sixth form before making his transition to university. Gurrell said that he toyed with the idea of becoming a financial engineer, and this desire was fuelled by an affinity for numbers and being intrigued by the Jamaican Stock Exchange. He challenged himself to try and attend university overseas. But a mishap in the registration process rocked his world.

"A counsellor submitted someone else's transcript so I was rejected from all my financial engineering programmes," he related.

He endured a week of despair, coping with rejection. "I just went by faith and applied to programmes that were still accepting. At this time all the programmes accepting finance and financial engineering were closed off, and I decided to go with mechanical engineer, which is another interest of mine," he said.

Gurrell enrolled at the Michigan-based university in October 2016, and prepared for the treacherous journey ahead. The 24-year-old added that time spent living on campus at Munro prepared him for life at Kettering.

Having been involved in various societies, including the National Society for Black Engineers, as well as maintaining a grade point average of 3.85 and above, afforded Gurrell US$175,000 in scholarships and the opportunity to serve internships at prestigious companies.

"My parents only paid for the first year, and that was only 50 per cent of the tuition, which is US$46,600 a year. They used everything from savings and OMNI-Education plan and I had to think about the rest," he said.

Gurrell is now a quantitative finance analyst with renowned investment bank Goldman Sachs. He was recently accepted to complete a master's programme at Wharton School of Business, University of Pennsylvania.

"This is something that I always wanted, from as early as my sophomore year, and I was very excited to know that I graduated with the highest honours possible. I was able to make my parents happy and they were able to cheer me on in my final semester, which was a hard year. To know that this was made possible through my hard work, it is a very fulfilling feeling," he said.

He encouraged Jamaicans to stay committed to their goals and to take their failures as lessons. "Failure is not final. I have failed job applications, I failed getting into finance programmes, but now I am able to work with the greatest investment bank as a financial engineer and it is a testament that failure is not the last thing," he said.