All gas stations to close by 8 p.m. nightly 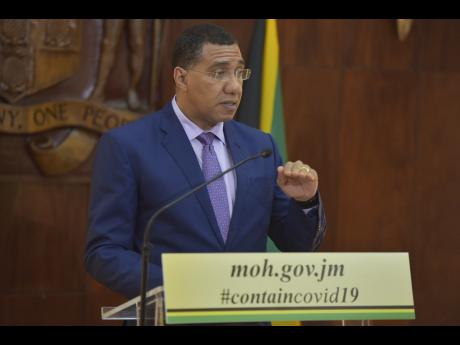 Prime Minister, the Most Hon. Andrew Holness, has announced that no gas station should remain open beyond 8:00 p.m. in keeping with the nightly island-wide curfew currently in place.


“We are now going to specifically prohibit the opening of gas stations starting tonight at 8:00 pm,” he said, during a digital press conference at Jamaica House on Friday (April 3).


The curfew, which was announced by the Prime Minister on March 30, is part of measures put in place by the Government to contain the spread of the novel coronavirus (COVID-19).


Mr. Holness noted that the restriction being placed on the opening hours of gas stations is prudent given the challenges being faced by the police in enforcing the curfew orders at these establishments.


“Under the current orders, it is possible for gas stations to remain open, but they are now being used as a gathering place and a potential launching pad for any form of disorder. It really distracts the police because they now have to be focusing on gas stations when they should be focusing on other areas,” he said.


He therefore advised motorists to make arrangements to fill their tanks before 8:00 p.m.


Under the measure, there are restrictions on all movement with some exemptions for specific categories of persons. There are also restrictions on public transportation.