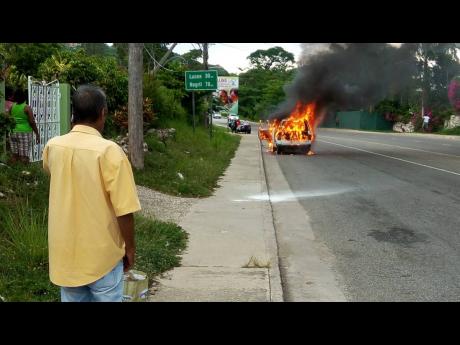 The businessman staring in shock as his Toyota Liteace is engulfed in flames.

A man is now praising God to be alive, after he barely escaped being burnt alive last Saturday afternoon along the Reading main road, in Montego Bay, St James.

This after his Toyota Liteace van caught fire, and then exploded.

"I just bought some gas, and drove from the gas station right up the road," the frightened motorist told The WESTERN STAR. "I left the gas station and was heading towards Great River, when I smell gas, and saw fire coming from a section of the bus, and immediately I stopped. It was then that the bus burst into flames, and I was able to jump out before it just blew up; I thank God to be alive."

The blazing vehicle resulted in a major traffic pile-up in both directions. Some motorists stopped to catch a glimpse of the inferno, while others were just afraid to pass by the large blaze.

The fire brigade was called to the scene, but the vehicle was completely burnt out before they reached the location.