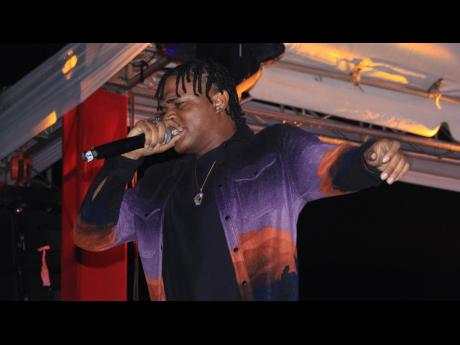 Marksman, also known as the 'Student Choppa' as his Instagram handle describes him, is reaping the rewards of hit singles that have captured fans globally.

The 17-year-old's breakout track, Verified Choppa 2, was a viral sensation on TikTok that eventually propelled the youngster to stardom. Since the track's release, he followed up with other records such as Top Coote and Visa.

Now, it seems Marksman has another viral track on his hands with Run E' Grung that currently has over 13,000 videos on TikTok. Interestingly, the song is prduced by deejay Javdon, given name Javan Jones, who is also 17, on the Javdon Musiq label. The full track is to be released on all platforms in the coming weeks.

According to Marksman, he plans to spend the rest of the year dropping catchy tunes that keep his fans satisfied and bring him closer to becoming a household name in dancehall.

"I just want to be dropping hits. Just hits after hits. Just a bagga hot songs just a galang so," he excitedly told THE STAR.

Marksman is still a sixth-form student at Frome Technical High School in Westmoreland, and plans to study medicine at university. But he also said he plans to balance the books and music career, as these are his priorities.

Marksman, whose given name is Oswayne Marks, hails from the James Hill district in Whithorn, Westmoreland. He recently hit the stage at Celebrity Playground, the first party in the Dream Weekend event series at Long Bay Beach Park in the parish. He told THE STAR that there is no better feeling than being recognised by where you come from.

"It's a great feeling to be performing in my home town, you know. I'm happy to see that everybody is coming out to see me, and I am very grateful for that. It is always a pleasure to see the fans in a place that I am from, and I am very excited to get on stage," he said.