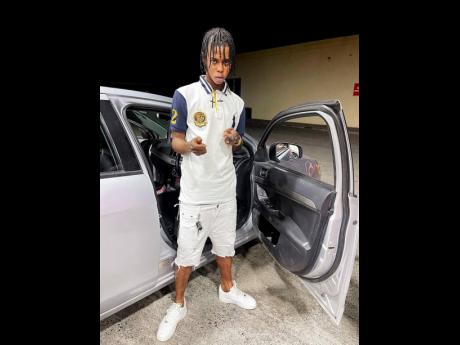 Emerging artiste N'Hance recently made his stage performance debut at Chug It in St Catherine, and it was quite the way to start.

The moment came three months after releasing the single No Love, which has since gone viral on TikTok, and attentive patrons sang the lyrics verbatim.

"I feel really great, overwhelmed with joy and also surprised at the same time," N'Hance told THE STAR. In the song, the singjay opens up about being hurt by exes and being afraid to fall in love again. Prior to doing music, N'Hance gained prominence partially as he is the son of dancehall artiste Sheba. The video has racked up an almost 700,000 view count.

"Most of my songs are based off real-life situations and feelings. I sing what I feel and I feel what I sing, and because I've been hurt and betrayed a lot and people seem to drag me a lot. Most of the times, I'm close to sad and near to anger. So you find that my songs sound very emotional with aggression," he said.

Though he does the occasional "trending topics like choppa songs", his vulnerability is what is striking a chord. His latest release, Nuh Malice Me, is a prime example. Produced by Touchah Gold Recordz, the track paints a picture of gangster-meets-God with N'Hance sharing that regardless of his street influence, money and other tangibles, he's a baby when it comes to the Most High and only hopes his sinful ways are not held against him.

"I've sinned, probably not murder, but by even telling a lie, that's committing a sin. There are times when I just feel like I'm untouchable and even people in my circle and community act and feel the same. But then in every bad situation, they cry for God. So it's just obvious to me that God is the real big man. I'm a God-believing and fearing person so Nuh Malice Me is not only a song but it's like a prayer, just in the way of a gangster," he said.

He's pleased with the positive reviews the song and music video have received so far. But while he believes it will do well, he believes that in the dancehall space, persons are quicker to gravitate to more negative topics.