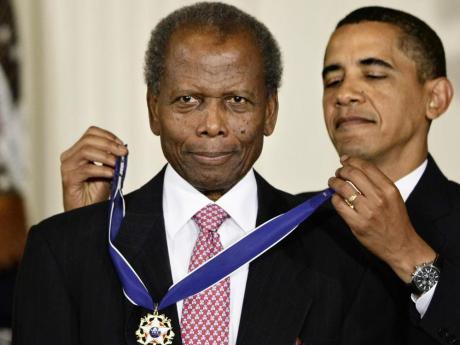 President Barack Obama presents the 2009 Presidential Medal of Freedom to Sidney Poitier during ceremonies in the East Room at the White House in Washington on, Aug. 12, 2009. - (AP Photo/J. Scott Applewhite, File)

NEW YORK (AP) — Sidney Poitier, the groundbreaking actor and enduring inspiration who transformed how Black people were portrayed on screen, became the first Black actor to win an Academy Award for best lead performance and the first to be a top box-office draw, has died. He was 94.

Poitier, winner of the best actor Oscar in 1964 for “Lilies of the Field,” died Thursday in the Bahamas, according to Eugene Torchon-Newry, acting director general of the Ministry of Foreign Affairs in the Bahamas.

Few movie stars, Black or white, had such an influence both on and off the screen. Before Poitier, the son of Bahamian tomato farmers, no Black actor had a sustained career as a lead performer or could get a film produced based on his own star power. Before Poitier, few Black actors were permitted a break from the stereotypes of bug-eyed servants and grinning entertainers. Before Poitier, Hollywood filmmakers rarely even attempted to tell a Black person’s story.

Messages honouring and mourning Poitier flooded social media, with Whoopi Goldberg writing on Twitter: “He showed us how to reach for the stars.” Tyler Perry on Instagram wrote: “The grace and class that this man has shown throughout his entire life, the example he set for me, not only as a Black man but as a human being will never be forgotten.”

Poitier’s rise mirrored profound changes in the country in the 1950s and 1960s. As racial attitudes evolved during the civil rights era and segregation laws were challenged and fell, Poitier was the performer to whom a cautious industry turned for stories of progress.