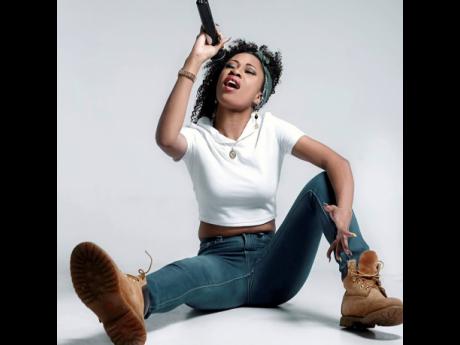 With music being her saving grace, multi-genre artiste Davianah was on board when producer Johnny Wonder suggested that she covers Indeep's 1982 disco classic, Last Night a DJ Saved My Life.

Her version of the track debuted on New Year's Eve, produced by Johnny Wonder and Adde Instrumentals.

"Big up Johnny Wonder; it was his idea cause he loves that song," Davianah told THE STAR. "When I listened to it, I was like 'this is my life' so I fell in love with it and I just did it."

Davianah first teased the visuals on her Instagram page, using a scene that depicts her using drugs. The marketing tactic can be deemed over the edge, but Davianah said her way of expressing art is a reflection of life.

"It's reality; life is not as pretty as they put it out," she said. "People put it out like it's this happy 24/7, everything is just going great and that's not the truth. The truth is, life gets ugly sometimes and you go through things and you will do all kinds of foolishness if yuh don't strong enough so I just like to highlight things that really happens... I have so many friends who pop so much pills and do all kinds of different drugs just to cope with themselves, so me just choose fi highlight some of the things weh nobody really waan talk bout."

The original version of Last Night a D.J. Saved My Life tells the story of a woman who was saved by a radio deejay playing goods songs. Rolling Stone magazine declared the song "one of the greatest songs ever written about being a girl, listening to the radio".

"People are really loving it and I figured they would because it's such a big song from its time," she said.

"I never figured all the young folks would be tapping into it cause so much young people just a tap inna it... Mi just a have some music ready fi shoot out after this cause mi see seh it a work."

The music in question is Real One, produced by Sonovic, which is featured on her upcoming EP Bad One. She is looking to release the EP under her Davianah Music label after dropping the single. There is also a Real One remix with Bugle.