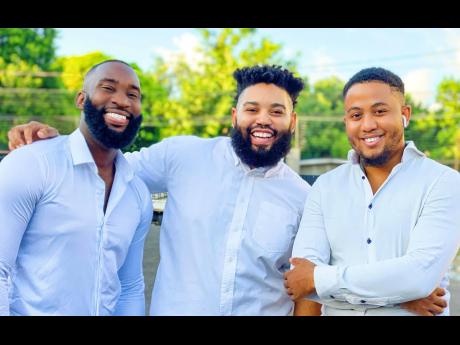 Recording trio Island Kings has said that a cover of Dutty Bungle by A'mari 'DJ Mona-Lisa' helped "grow the following" when they started recording together.

The professional vocalists King Diel, Lee King and Just King received the song suggestion from reggae-dancehall act Romain Virgo and they decided to step up to the challenge. It became their seventh cover.

"At first we did not think it could work but when we go into the street now, people identify us as 'rise dutty bungle'," Lee King told THE STAR. "Nuff people have criticised A'mari for whatever reason but we have to big her up and big-up to Romain."

The fast-rising group has yet to connect with the controversial artiste but point out that she had shared their rendition of the single.

"Most covers that we've put out, barring two or three (a few) of them, would have received the nod of its original singer," Lee King said, adding that the covers are shared across social media mostly. "Most artistes have seen it as us giving some love and strength rather than us taking their music and we're happy about that."

However, as they look to officially launch their YouTube page, they know the issues with copyrighting and licensing to use specific songs may arise.

"Truth is we haven't put much thought into that part as yet," King Diel admitted. They have already uploaded a cover of Adele's Easy On Me, Koffee's Lockdown and Jamaica's National Anthem.

"We could have started earlier but I think we never expected our following to grow so fast and we've got so many requests of songs to cover. It is not easy especially since we are the ones doing the content weekly; we produce the music ourselves, make the track, then to get it mixed and mastered, and record the video in the car and get that at a professional standard," said King Diel.

He added "This is truly a journey for us. And now that we are exploring the idea of doing more than covers, now we want to take advantage of all the platforms. I think we'll continue to do the car covers for a while. As we move out of it, I don't think we have to do one or the other, or until in our heads it becomes played out. As I said before, some things we don't have fully figured out."