Lawyers to reveal Scratch Perry’s cause of death 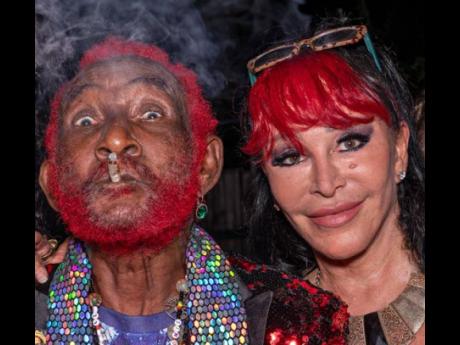 Lee ‘Scratch’ Perry (left) and his wife Mireille during his 85th birthday celebration earlier this year.

All matters surrounding the sudden death of entertainer Lee 'Scratch' Perry are in the hands of his lawyers, his widow, Mireille, told THE STAR.

She said that the eccentric Perry, who was dubbed both a madman and a musical genius, passed away on Saturday, August 28 - not Sunday, August 29 as is being reported - and died while on his way to the Noel Holmes Hospital in Lucea, Hanover, and not after he got there.

"We cannot talk about the cause of his death," Mirielle said of the passing of the 85-year-old entertainer, who she has previously stated "was not sick" prior to his death. "[I am] not allowed to talk at the moment as long as the lawyer don't tell me it's okay."

However, she was quite receptive to having a conversation "later" when she is given the go-ahead. But, for now, she is requesting understanding.

"Please also understand, everything in Jamaica takes longer and I will come with more information as soon as it becomes possible," Mireille promised.

Mireille, who was more than 20 years younger than her youthful, octogenarian husband, has taken to social media to declare her love for the man she called her best friend.

One week after his passing, she wrote "You were more than a husband, you were my best friend. We share a bond that lives beyond death. I will cherish you forever. I will try my best to keep your spirit alive."

Born in Hanover, Perry's music career started in the 1950s as an assistant at a prominent record label and subsequently spent close to 70 years creating, refining and redefining dub and reggae music. He worked with artistes such as Bob Marley and the Beastie Boys. A five-time Grammy nominee, he won the Best Reggae Album in 2002 for Jamaican ET.

Keith Richard, co-founder, guitarist and vocalist of the super group, Rolling Stones in a 2010 interview with Rolling Stone magazine described Perry as "the Salvador Dali of music".

"He's a mystery. The world is his instrument. You just have to listen. More than a producer, he knows how to inspire the artiste's soul," he said.